Routinely acquired CT images in patients with cancer contain important biomarkers, such as muscle and adipose tissue, that are typically overlooked during clinical care. Florian J. Fintelmann, MD, physician–scientist in the Division of Thoracic Imaging and Intervention of the Department of Radiology at Massachusetts General Hospital and associate professor of Radiology at Harvard Medical School, and colleagues recently reported multicenter studies in Annals of Surgery and Cancer Medicine that showed that muscle assessment on chest CT before lung surgery improved the prediction of morbidity and mortality in patients with lung cancer.

Now, the group has developed an automated image analysis system (or pipeline) that fully automates quantification and characterization of thoracic muscle and adipose tissue at multiple vertebral levels. It's described in Radiology: Artificial Intelligence by Christopher P. Bridge, DPhil, director of Machine Learning in the Data Science Office and a member of the Athinoula A. Martinos Center for Biomedical Imaging, Till D. Best, MD candidate, Dr. Fintelmann, and colleagues.

The system was created with deep learning, a form of artificial intelligence that uses large artificial neural networks to learn patterns in images or other complex data through iterative training steps without specific programming. Once the network is fully trained, it can make predictions for previously unseen images.

The system, consisting of two neural networks, was trained and validated on 629 chest CT scans from 629 patients with lung cancer, acquired before lobectomy in a study pooling data from three medical centers. These scans were made with 37 scanner models from four manufacturers.

A U-Net, a convolutional neural network for segmentation, then segmented muscle and adipose tissue on each image.

On an independent test set, the researchers compared the ground truth with two metrics for muscle and adipose tissue for each level:

The system's results were very well matched to the performance of human analysts, with intraclass correlation coefficients ranging from 0.951 to 0.998.

Intravenous contrast material was used for 56% of scans. There was no significant difference in performance between scans with and without contrast regarding slice selection, cross-sectional area, or median attenuation.

The earlier system that was adapted for this work was designed for body composition analysis at L3. Only minor changes to the DenseNet were required, suggesting the possibility of scaling the new system to more vertebral levels.

Similarly, the single U-Net network was able to segment all three thoracic levels and might be able to analyze more.

Learn more about the Division of Thoracic Imaging and Intervention 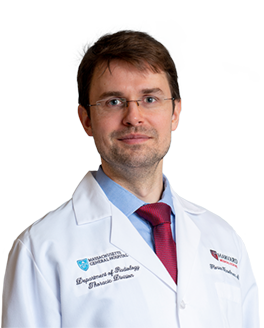 Researchers at Massachusetts General Hospital demonstrated that "CXR-Age," a convolutional neural network, can estimate biological age from a chest X-ray image. This biological age was better than chronological age at predicting longevity.