Shibani S. Mukerji, MD, PhD, associate director of the Neuro-Infectious Diseases Unit of the Department of Neurology at Massachusetts General Hospital, talks about her work on neuroinfectious diseases and how pathogens invade the nervous system. She also discusses her laboratories work on how HIV infection can result in cognitive impairments such as depression.

Neuroinfectious disease research can encompass a wide range of items that include both diagnostic and detection of pathogens that can invade the nervous system. It can be clinical manifestations, it could also be a treatment. There is a large subset of individuals that are heavily focused on how the immune system, either the systemic immune system or the neuroimmune system, interacts with pathogens, so that is host-pathogen interaction.

Our lab is largely focused on how HIV infection affects the nervous system and, in particular, how HIV infection despite therapy can result in neurological comorbidity that includes cognitive impairment or depression. Our lab is focused for a long time on trying to figure out how immune activation or systemic markers of disease including disruption in the neuroendocrine axis really translates to disruption of neurological function, largely manifest into cognitive impairment or depression, which is high in the HIV population.

So some of our exciting work on HIV, which we've identified using a large metabolomic screen, is to look at people with HIV that were virally suppressed on therapy. About 25% were already on anti-depression medication. Those individuals with persistent depressive symptoms, when compared to individuals that did not have persistent depression, basically to take a look and see what pathways were altered and maybe to see whether not those could be targets.

So one of those pathways that is altered was a neuroendocrine axis pathway. Our next research is to try to identify whether or not this pathway is affected in other cohorts of people with HIV, again virally suppressed, on treatment, but really suffering from depression symptoms, and essentially try to see whether or not this pathway, this axis, is something that we could use to then go further to target for therapy. I think that's what is most exciting about this piece of work is that we identify, that there is a subset of women who are at particular risk for depressive symptoms in HIV. Those individuals had this particular pathway that was dysregulated—and so doing so, our next research is not looking at a more broad perspective of people with HIV, but really focusing in on women who have persistent depressive symptoms despite therapy and to take a look whether or not this could be a particular target.

Learn more about the Neuro-Infectious Diseases Unit at Mass General 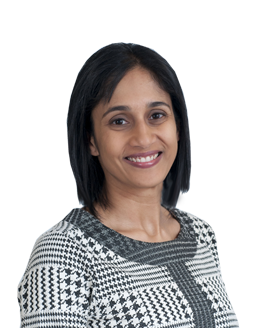 Shibani S. Mukerji, MD, PhD, associate director of the Neuro-Infectious Diseases Unit of the Department of Neurology, talks about her work on developing the COVID-19 Acuity Score (CoVA), which can be incorporated into an electronic health record system.