Neurotoxicity is one of the two principal treatment-limiting effects of chimeric antigen receptor (CAR) T-cell therapy. It's less common than the other main toxicity, cytokine release syndrome (CRS), but the time of onset is more variable. In many institutions, patients treated with CAR T-cell therapy are routinely kept in the hospital for seven to 14 days to be observed for neurologic symptoms.

Neurologist Daniel B. Rubin, MD, PhD, critical care neurologist in the Department of Neurology at Massachusetts General Hospital, and colleagues have created a prognostic tool to determine which patients are likely to develop neurotoxicity and need prolonged hospitalization. Their report appears in JAMA Neurology.

To derive the multivariable model, the researchers used data on 126 patients who received axicabtagene ciloleucel for relapsed or refractory lymphoma between April 2015 and April 2019. To validate the model, they studied 78 such patients who were treated between May 2019 and February 2020.

A clinical score was calculated as follows:

The possible score ranges from 0 to 14. When tested on the entire derivation cohort, the tool had an accuracy of 86%.

The researchers calculated the predictive score for each patient in the validation cohort. When a score of 6 was used as a cutoff, the model correctly predicted the occurrence of neurotoxicity with an accuracy of 77%, sensitivity of 82% and specificity of 70%.

Eight patients in the validation cohort were misclassified as unlikely to develop neurotoxicity (false-negatives). Five of them had only grade 1 symptoms, and seven had delayed onset of CRS before developing neurotoxicity.

Advantages of the Tool

The prognostic score is calculated from objective data during the first five days of hospitalization, so high-risk patients can be triaged to higher levels of care. For patients unlikely to develop neurotoxicity, earlier hospital discharge may be possible.

Delayed onset of CRS should alert clinicians to the possibility of delayed neurotoxicity, even in patients previously deemed to be at low risk. It's worth noting that most patients with false-negative results in this study had only grade 1 symptoms, which can be treated in the outpatient setting.

Learn more about the Department of Neurology at Mass General 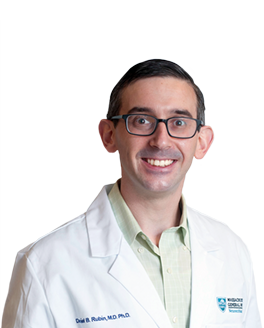 Massachusetts General Hospital researchers are the first to report that changes in eosinophil, lymphocyte and platelet counts might serve as biomarkers of clinical outcomes in patients with recurrent glioblastoma who are treated with bevacizumab.