Neurologists at Massachusetts General Hospital have published in The New England Journal of Medicine the case of a woman who endured gait disturbance, cognitive impairment and urinary incontinence for two years before she was diagnosed with normal-pressure hydrocephalus and successfully treated with surgical shunting.

At presentation, Nagagopal Venna, MD, director of the Neurology-Infectious Diseases Clinic, and team report that the patient had a score of 12 on the Mini–Mental State Examination (MMSE) and a short-stepped, narrow-based gait. Her time on a 7.6-m walk test was 31 seconds.

Magnetic resonance imaging revealed ballooning of the ventricles. The authors explain that Part A shows that the Evan’s ratio was 0.37 (the upper limit of the normal range is 0.31). The width of the frontal horns of the lateral ventricles was 45 mm and the internal diameter of the skull was 122 mm.

Part B of the figure shows that the callosal angle between the lateral ventricles (white arrow) was less than 90 degrees (normal range, 100–120 degrees). The callosal angle (outlined in white) is measured at the level of the posterior commissure (black arrow) on a coronal plane perpendicular to a line between the anterior and posterior commissures.

A lumbar puncture revealed a normal opening pressure, which is consistent with normal-pressure hydrocephalus. The patient’s symptoms of urinary incontinence, gait disturbance and dementia are also classic manifestations.

Surgical shunting of cerebrospinal fluid is the principal treatment for normal-pressure hydrocephalus. A ventriculoperitoneal shunt was placed, which led to marked improvement in the patient’s symptoms. One month after shunt placement, her MMSE score was 20 and her urinary incontinence had resolved. At six months, her MMSE score was 28 and she walked 7.6 m in six seconds.

Learn more about the Neurology Department 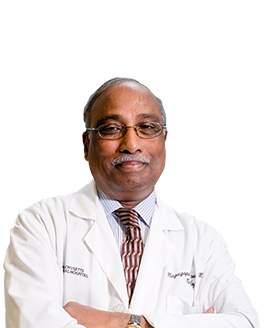