Research from Massachusetts General Hospital uncovered an unexpected connection between an imbalance of electrons in liver cells and many metabolic problems that increase the risk for conditions such as cardiovascular disease and fatty liver disease. Their work is published in Nature.

Russell Goodman, MD, DPhil, hepatologist in the Mass General Division of Gastroenterology, Vamsi Mootha, MD, director of the Mootha Laboratory in Mass General's Department of Molecular Biology, and colleagues conducted the study by administering a genetically engineered enzyme (LbNOX) to the livers of lab mice who had consumed alcohol. Consuming alcohol or high-fat diets is known to generate excess electrons, causing reductive stress.

The researchers found a metabolite in the blood called alpha-hydroxybutyrate that increased when electrons built up in liver cells. Alpha-hydroxybutyrate levels have been previously linked in humans to a variant in a gene called GCKR, which seems to affect risk for many diseases and unhealthy traits, such as fatty liver disease and elevated levels of blood fats called triglycerides. The study demonstrated that the GCKR mutation in mouse liver cells was associated with high levels of alpha-hydroxybutyrate, linking it to reductive stress.

Importantly, the study found that treating reductive stress with LbNOX lowered levels of triglycerides, which increase the risk for cardiovascular disease and improved metabolic factors like insulin resistance. Dr. Mootha believes alpha-hydroxybutyrate could be used as a biomarker to test for reductive stress and that LbNOX may one day serve as a treatment for diseases caused by metabolic dysfunction.

Visit the Department of Molecular Biology at Mass General

Learn more about the Division of Gastroenterology 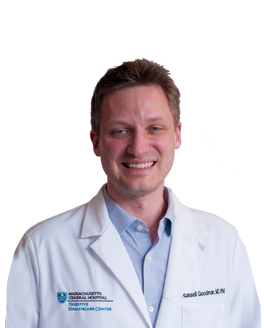 Microscopic colitis differs strikingly from many other immune- and metabolic-related disorders, including other forms of inflammatory bowel disease, in that its incidence is inversely associated with obesity and weight gain since early adulthood.

Obesity Linked to Improved Survival of Patients with Pulmonary Hypertension

Akin to the "obesity paradox" described in heart failure, Massachusetts General Hospital researchers find that obesity in patients with pulmonary hypertension is associated with reduced mortality.