Two recent randomized controlled trials, published together in the June 25, 2020, issue of The New England Journal of Medicine, showed no renal function–preserving benefits of allopurinol in patients with chronic kidney disease (CKD). Instead, to the investigators' surprise, both trials pointed to a two-fold higher risk of death. That was borne out later in two pooled analyses.

In patients who have both CKD and gout, however, Massachusetts General Hospital researchers found no association between allopurinol and mortality. Yuqing Zhang, DSc, director of Epidemiological and Biostatistical Methods in the Division of Rheumatology, Allergy and Immunology, Hyon K. Choi, MD, program director of the Clinical Epidemiology Program in the department, and colleagues at the Xiangya Hospital in China, published the first study on this question in Annals of Internal Medicine.

The team searched The Health Improvement Network, a database of more than 17 million patients enrolled in U.K. general practices, for patients who were 40 to 89 years old and had gout with concurrent stage ≥3 CKD between January 1, 2000, and January 1, 2018. In all three of the following analyses, the primary outcome was death within five years after initiating allopurinol.

The researchers generated a propensity score—the probability that each individual would be assigned to receive the drug based on their demographics, geographic region, body mass index, drinking and smoking status, CKD stage, glomerular filtration rate, serum urate level, comorbidities, and medications. This process allowed the matching of 5,277 initiators of allopurinol with 5,277 non-initiators who as groups did not differ significantly on any of those factors.

Mortality was significantly lower in initiators than in non-initiators:

Second, the researchers conducted analyses as if the study subjects had been in randomized, controlled trials:

Effect on mortality of achieving a target serum urate level (per multiple rheumatology society guidelines, defined as <6 mg/dL [<0.36 mmol/L] within one year after initiation)—1,484 initiators achieved the target. For achieving versus not achieving the target, the difference in mortality over 5 years was −1.6 percentage points and HR was 0.87 (95% CI: 0.75 – 1.01).

These findings provide empirical evidence that the current treat-to-target approach of lowering serum urate with allopurinol is not tied to an increased risk of mortality in patients who have both gout and CKD.

Learn about the Division of Rheumatology, Allergy and Immunology 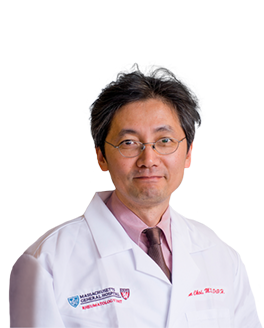 Hyon K. Choi, MD, of the Division of Rheumatology, Allergy and Immunology, and colleagues report preliminary evidence that a dietitian-directed, DASH-patterned behavioral intervention lowers serum urate in gout patients not on urate-lowering drugs.

Hyon K. Choi, MD, Chio Yokose, MD, MS, and Natalie McCormick, PhD, of the Division of Rheumatology, Allergy and Immunology, suggest pharmacologic agents that can both lower urate levels in patients with gout and treat common cardiometabolic-renal comorbidities of the disease.