In acute ischemic stroke treatment, the goal is to restore blood flow as rapidly as possible. Thrombolysis with intravenous (IV) tissue Plasminogen Activator (tPA) has been the mainstay of ischemic stroke therapy since the mid-1990s. IV tPA effectively recanalizes nearly 45% of patients with a smaller clot burden in smaller blood vessels. It is much less effective in strokes caused by large vessel occlusion (LVO), however, because of the substantial clot volume involved.

Within the past two years, several multi-center clinical trials have shown that utilizing mechanical endovascular removal of a clot (usually in addition to IV tPA) can effectively restore blood flow in up to 80% of LVO strokes (fig. 1). And for the first time, these studies provide unequivocal evidence that thrombectomy reduces the severity of post-stroke disability and increases functional outcomes compared with IV tPA alone. In some studies, the rates of functional independence nearly doubled with endovascular treatment.

“These studies have completely changed the face of endovascular stroke care”, says Thabele Leslie-Mazwi, MD, of the multidisciplinary endovascular practice at the Massachusetts General Hospital Fireman Vascular Center. LVOs only account for 15-20% of all ischemic strokes, but are responsible for almost 80% of the death and severe disability caused by strokes. “Anything positive you do for this extremely ill stroke subgroup will have a disproportionate effect on the public health implications of stroke,” says Dr. Leslie-Mazwi.

Dr. Leslie-Mazwi recently published outcome results of Mass General patients treated with endovascular therapy to remove these clots. The paper, published in JAMA Neurology in 2016, showed that favorable outcomes were observed in 74% of likely-to-benefit patients who had successful reperfusion. Currently, about 70 patients each year meet criteria to receive endovascular stroke care at Mass General, with more than four times that number evaluated for possible LVOs. With the results of the new trials these numbers are increasing.

To be considered a candidate for endovascular therapy, patients must have a documented LVO. Secondary considerations include the time since stroke onset and the size of the stroke core—the volume of tissue irreparably harmed by the clot. “The volume of the core determines the outcome,” explains Dr. Leslie-Mazwi. Patients with core volumes of 70ccs or less are most likely to have good outcomes post-reperfusion. Volumes more than 100ccs are likely to lead to poor outcomes, but that figure may be closer to 120ccs for certain populations (such as younger patients).

The Stroke Service program at Mass General, led by Chief Lee Schwamm, MD, including the Acute Stroke Services led by Director Natalia Rost, MD, has developed standardized criteria for those patients proven to benefit from endovascular therapy, an expansive Telestroke program, active state legislative efforts, and innovative approaches for treating this exquisitely time-sensitive process. For example, through the hospital’s LVO2OR program, patients who have an outside scan from another hospital showing an LVO are transferred directly into the neuroendovascular suite at Mass General without additional imaging or work-up. “We’ve had routine door-to-puncture times of under nine minutes with this program,” says Dr. Leslie-Mazwi. “In this disease, every second counts” 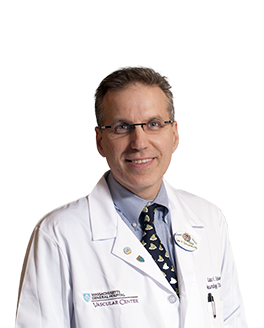 A team of clinicians led by Ahmed A. Tawakol, MD, co-director, Cardiac MR PET CT Program, has found a novel pathway linking psychosocial stress to heart disease. Published in the The Lancet, this study finds that brain activity in the stress-responsive area of the brain (the amygdala) predicts subsequent heart attacks and stroke.