Orthopedic surgeons don't agree about the causes of failure of primary superior labrum anterior and posterior (SLAP) repair, mostly because there have been few comprehensive studies of the issue.

The researchers examined data on 539 adults who had arthroscopic SLAP type II repair at Mass General or an affiliated hospital between 2005 and 2016. Of this cohort, 52% underwent at least one other concomitant procedure, not including subacromial decompression or joint debridement (rotator cuff repair, 62%; distal clavicle excision, 41%; or other).

The outcomes were defined as:

All patients undergoing primary type II SLAP repair should be aware of the potential for reoperation. It is also important to consider modifiable risk factors including smoking and obesity when discussing surgical options.

Learn more about the Shoulder Service at Mass General 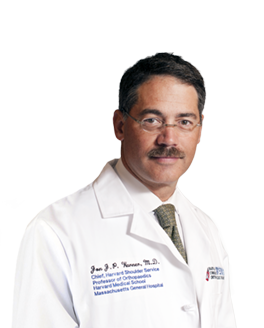 Case Report: Rupture of the SHB Brachii and Coracobrachialis Tendon

Jon J.P. Warner, MD, and Neal C. Chen, MD, from the Department of Orthopaedics at Massachusetts General Hospital, and colleagues describe how they managed a rare case of complete rupture of the short head of the biceps brachii and coracobrachialis tendon.