Emerging evidence suggests SARS-CoV-2, the virus that causes COVID-19, can affect the central nervous system. Initial neuroimaging findings in patients with COVID-19 include infarction, hemorrhage and encephalopathy; more recently (published in Radiology), leukoencephalopathy with intracranial microhemorrhages has been reported.

In AJNR: American Journal of Neuroradiology, Min Lang, MD, resident in Radiology, and Sandra P. Rincon, MD, staff neuroradiologist at the Department of Radiology, with Thabele Leslie-Mazwi, MD, director of Endovascular Stroke Services in the Department of Neurosurgery and Department of Neurology at Massachusetts General Hospital, and colleagues report on detailed brain MRI analysis of 42 patients with COVID-19, six patients of whom had findings suggestive of white matter injury, potentially a delayed sequela of profound hypoxia.

Background on the Cases

All six patients required intubation in the Mass General Emergency Department for hypoxic respiratory failure. Their average age was 64 (range, 60–76). All were without neurologic impairment at the time of presentation and none had a history of neurologic disease or were immunocompromised. One patient had undergone brain MRI a year before, which demonstrated minimal nonspecific white matter changes without other abnormalities.

The mean time to brain MRI was 26 days from admission. All patients exhibited relatively symmetric T2/FLAIR hyperintensity and restricted diffusion of the bilateral deep cerebral white matter, with relative sparing of the subcortical U-fibers and brain stem. Additional sites of white matter involvement were the:

It has been postulated that prolonged or severe hypoxemia can lead to myelin sheath damage through dysfunction of the adenosine triphosphate–dependent enzymes responsible for myelin secretion and maintenance. Myelin secretion occurs every 19 to 22 days.

Three sets of findings in this study are suggestive of delayed post-hypoxemic leukoencephalopathy detected on brain MRI:

The consequences of delayed post-hypoxic leukoencephalopathy can be severe, including chronic neurologic deficits and death. Health care professionals should be aware of the potential for a delayed leukoencephalopathy syndrome in patients with COVID-19 who display subacute neurologic deficits, even those whose respiratory status has improved. A low threshold to perform brain imaging on such patients is appropriate. 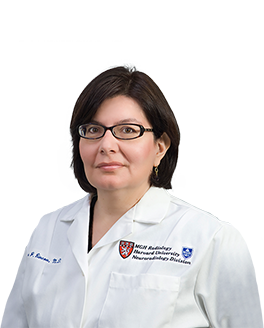 Women's poorer functional outcomes after acute ischemic stroke, compared with men, may be due to sex differences in the structural integrity of cerebral white matter and the permeability of the blood–brain barrier.

Consensus Statement: Management of Patients with Cerebellar Ataxia During the COVID-19 Pandemic

The COVID-19 pandemic has short- and long-term consequences for patients with cerebellar ataxia and their families.