On April 9, 2020, FUJIFILM Corporation announced the initiation of a U.S. phase II clinical trial of its influenza antiviral drug Avigan (favipiravir) for patients with COVID-19 at Massachusetts General Hospital, Brigham and Women’s Hospital and the University of Massachusetts Medical School. Early results of studies in China have generated much excitement around the drug, but randomized controlled trials are needed to prove its efficacy.

Boris Juelg, MD, PhD, an attending physician in the Division of Infectious Diseases at Mass General and an assistant professor at Harvard Medical School, is the principal investigator of the study at Mass General. As part of the newly formed COVID-19 Clinical Trials Program, he co-chairs the clinical trial steering committee, helping to evaluate new proposals for clinical intervention trials at Mass General. In this Q&A, he explains what is currently known about the drug and why he is excited about its potential to treat COVID-19 patients.

Q: What do we know about using favipiravir and its use to treat patients with coronavirus today?

Juelg: Favipiravir, or Avigan, is a drug that was developed by Toyama Chemical, a subsidiary of FujiFilm. In 2014, it was approved in Japan to be used as a backup drug for resistant influenza infection. It is an antiviral drug, and it works by inhibiting viral replication in infected cells, which prevents or reduces the spread of virus from one cell to another.

This drug is for influenza, primarily, but has also been shown in vitro, so in cell cultures, to have activity against other viruses. For example, it has some activity against Ebola. It was tested in West Africa at the time when they had the Ebola outbreaks, but not in large, randomized, controlled trials. So therefore, there is no clear evidence to say it definitely works. Given that it has antiviral activity, they are now testing it against SARS-Cov-2, where is has shown activity against the virus.

Q: What have recent studies shown?

Juelg: There were several studies in China, two where there is data available. One was a small study where they treated 35 people with COVID-19 with favipiravir. And they had a control group of 45 people who were treated with Kaletra, which is an HIV drug. They looked at how fast people clear the virus—so how fast does the PCR swab test become negative—and saw that, on average, people who are treated with favipiravir become negative after four days, while the other group took 11 days. That was statistically significantly different. An important caveat is this was not a completely randomized trial.

Favipiravir itself is not FDA approved in the U.S., or approved anywhere else than Japan. However, there have been past studies in the U.S. with favipiravir for influenza. Overall favipiravir, has been studied in over 3,000 people so far and there's a lot of safety data available on the drug. That's always a good start.

Q: Why was this drug prioritized to be one of the first COVID-19 drug trials at Mass General?

Juelg: What we know so far about COVID-19, which is still quite limited, is that in the beginning you have rapid viral replication. Then some people clear it, but in others, it triggers a cascade of the immune system that leads people to deteriorate. What we want to do is block the virus from replicating, like you do for influenza: you give Tamiflu and you want to stop or reduce the amount of virus.

There are not many known direct-acting antivirals that could work against SARS-Cov-2. So Remdesivir's one, favipiravir is one, but there's not a long list of available agents that may work. These agents have safety data, have shown antiviral activity and are clinically available to test. New compounds are in development, but they are a long way from entering clinical trials. In addition, we also have clinical data from COVID-19 patients showing a signal of efficacy. So that makes favipiravir one priority.

Juelg: There is some concern for teratogenicity based on study data in animals—meaning it could have an effect on growth and development of babies. Therefore, pregnant women are excluded from the clinical trial. However, there isn’t any clear evidence of that in human studies.

We have also seen elevated uric acid in the blood because of the drug. Therefore, we need to make sure that people don't have gout and monitor uric acid in their blood levels. There may be some gastrointestinal side effects, but that's pretty much it.

Q: What is Mass General’s role in clinical trials with this drug?

Juelg: There are three Massachusetts sites with three investigators: Robert W. Finberg, MD, at UMass Medical, Lindsey Robert Baden, MMSc, MD, at Brigham and Women’s Hospital, and then me at Mass General. The whole thing came about through Dr. Finberg because he had worked with Fuji on influenza in the U.S. So they approached him to set up this phase II trial in 50 patients at the three hospitals to test the drug in a randomized way. We hope to see a similar signal that was seen in their study in China. If it goes well, the next immediate step is to set up a larger study. 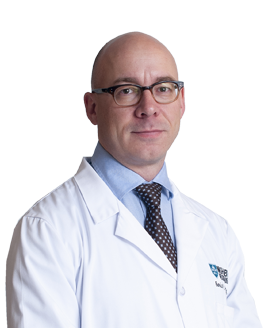 Tocilizumab, a monoclonal antibody that blocks IL-6 already approved in the U.S., might be effective against COVID-19, researchers from Massachusetts General Hospital believe.