William H. Harris, MD, who founded the Harris Orthopaedics Laboratory at Massachusetts General Hospital, pioneered important innovations in the field of orthopedics throughout his six-decade career. A unique combination of researcher and surgeon, Dr. Harris took the limitations and failures he experienced as a surgeon into the laboratory to seek solutions.

Numerous innovations resulted, including the Hip Harris Score, which Dr. Harris describes as “a rigorous method to quantify the effects of hip disease and of hip surgery.” He also spearheaded efforts to eliminate fatal pulmonary embolism after hip surgery, which previously had impacted one out of every 50 patients undergoing the procedure. Dr. Harris is particularly proud of his development of the cement-less hip socket, now a global standard.

In part two of his interview with Oxford University Press, Dr. Harris reflects on the overall impact of his career. He recalls his discovery of periprosthetic osteolysis and the development of its cure in part one of the interview.

“The rewards, both intellectual and emotional, of being a clinician scientist can be very rich, especially so are the potential rewards to a surgeon-scientist. The surgeon-scientist is both emotionally and intellectually driven by his or her failures, but is also provided the opportunity of taking the limitations and failures that he sees his own patients into a laboratory setting to see if creative efforts can solve those problems.”

Refer a patient to the Hip & Knee Center 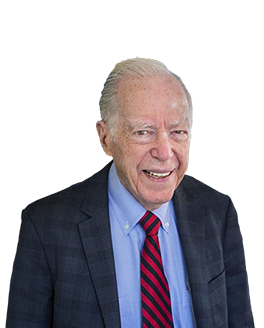 In part one of an interview with Oxford University Press, Dr. William H. Harris reflects on a lifetime spent as a pioneer in total hip arthroscopy (THA). Dr. Harris discovered the condition known as periprosthetic osteolysis, the major bone damage surrounding an implant that was commonly seen in the early years of THA. He led a team at the Harris Orthopaedics Laboratory to develop its cure.