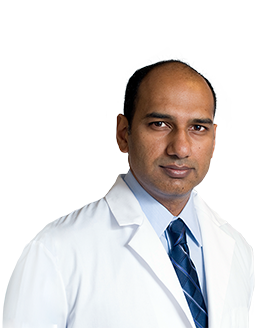 Dr. Muniappan’s clinical activity includes all areas within general thoracic surgery, and he is experienced caring for lung, airway, chest wall, mediastinal, diaphragmatic and esophageal disorders. He is well versed in minimally invasive techniques and utilizes them whenever appropriate. He has a special interest in pulmonary metastasectomy, airway surgery (tracheal resection, bronchoplasty), resection and reconstruction of the chest wall for malignant disease, repair of tracheoesophageal fistula, and minimally invasive repair of pectus excavatum. His research interests have focused on the management of complex general thoracic surgical problems such as tracheoesophageal fistula.

Dr. Muniappan was born in Madurai, India, and moved to Hamilton, Canada as a young child after his parents emigrated so his father could complete his PhD. He had a peripatetic childhood and lived in Winnipeg and Ilorin, Nigeria, before his family finally settled in San Jose, California. He attended Jesuit high school and subsequently the University of California, Berkeley, where he majored in Molecular and Cell Biology with an emphasis in Immunology. Dr. Muniappan graduated from Tufts University School of Medicine in 2000. He completed his residencies in General Surgery (2007) and Cardiothoracic Surgery (2009) at Massachusetts General Hospital. He finished a post-doctoral fellowship with Dr. Joren Madsen at the Mass General Transplantation Biology Research Center (2005) and mini-fellowships in clinical thoracic surgery at Mayo Clinic and University of Pittsburgh Medical Center before joining the faculty of Massachusetts General Hospital Division of Thoracic Surgery in 2010.

For over 100 years, the Department of Radiology at Massachusetts General Hospital has pioneered imaging technology to improve human health. Today, our researchers develop powerful new ways to diagnose and treat many diseases. From the lab to the clinic, our community of radiologists and researchers brings advances directly to our patients.